skip to main | skip to sidebar

Saturday night we visited The Elevator Brewery & Draught Haus for dinner. What a fun evening! First of all, this place is just downright cool. The bar is lit with blue lights. You know the blue I’m talking about; cobalt blue. It set a tone to the bar that was alive and warm. The building is long and narrow, so as we walked through the bar area, the sounds of voices and laughter bounced around us. If I hadn’t been in a good mood already that would have lifted my spirits right then and there!

We were seated almost immediately at a table just past the middle of the restaurant. This was a very good place to be. Our server introduced herself to us and helped us with our drink orders. She left us with the Restaurant Week menu as well as the regular menu as she went to put in the drinks. We have definitely decided that someone in the kitchen at the Elevator certainly knows his/her way around a stove! The menu is just packed with items that all look so delicious it’s almost a sin not to order one of everything! I had a difficult time restraining myself.

In addition to the three course Restaurant Week menu, I ordered the sauerkraut balls as an appetizer to share. I thought I was being very sly and slipped it in when Bob wasn’t paying attention, however he can read me like a book. I saw the grin on his face and knew I’d been busted. He knows I have a weakness for sauerkraut balls. And having mentioned about three times that they were on the menu, in reality, I probably wasn’t really that sly at all. 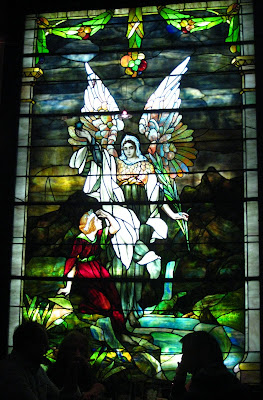 As we waited for our food, we looked around at the wonderful artwork in the Elevator. There is a stained glass window that just simply commands your attention. It is gorgeous. And having an affinity for angels, I especially liked it. How wonderful it was to glance up during dinner and see the beautiful face of that angel. 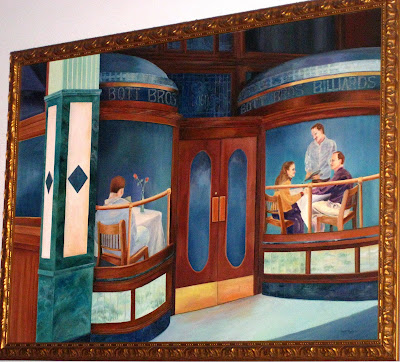 In addition to the stained glass, there were paintings that were quite fun. There is one that is the street view of the restaurant. The two windows in front are curved outward and have seating that is kind of like a private nook. Very cool. 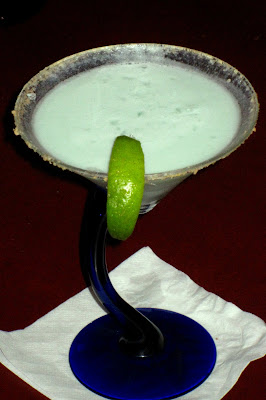 Our drinks came and may I just say that I now know that I love a good key lime martini? Wow! Who knew that a combination of vanilla vodka, pineapple juice, cream, lime and Blue Curacao could taste so good? Well rim it with graham cracker crumbs and lead me to the pool! That’s what Jenny and I felt like as we sipped our Oh-So-Caribbean drinks. They were simply divine. 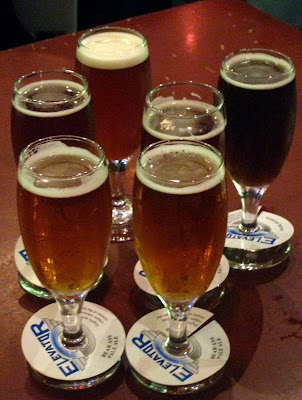 Bob had a flight of six house-brewed beers so he was completely and sublimely happy, too. 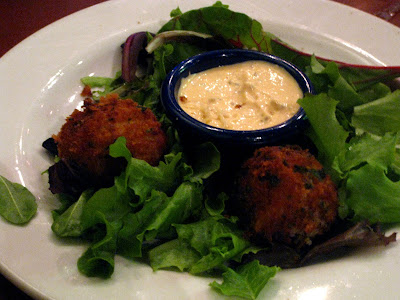 The sauerkraut balls were everything I hoped they’d be. The outside was crisp and crunchy. The inside was a mixture of sauerkraut with a little pork and seasonings; a perfect combination of ingredients that left you wanting … more! (I apologize for the fact that the picture shows only two. We, um, all kind of dug in before we remembered to take the picture!) The sauce was reminiscent of Thousand Island dressing with horseradish; a definite compliment to the sauerkraut balls.

It was time to start our dinner. The first course choices were Crab Stuffed Scallop, Xtra Lager Corn Chowder, and Spinach Salad. 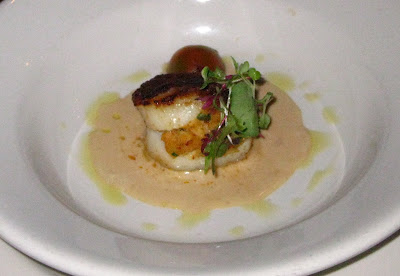 I began with the Crab Stuffed Scallop. It was described as; “Sea scallop stuffed with an Elevator crabcake, pan seared then drizzled with a lemon Dijon beurre blanc and topped with red wine vinaigrette dressed microgreens.” I described it as incredible. The scallop was perfectly cooked. (If you’ve ever had a scallop that wasn’t cooked well, you know the importance of which I speak on this topic!) The crabcake inside was delicate so as not to overpower the scallop. The microgreens and beurre blanc raised the dish to a whole new level. Like I said, it was incredible. 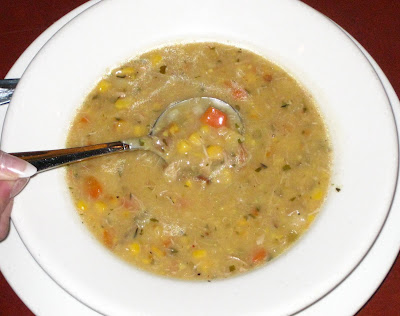 Bob had the Xtra Lager Corn Chowder. Compared to the simplicity of flavors in the scallop dish, the chowder had a whole lot goin’ on! It was a study in complexity. With a chicken stock base, it was loaded with corn, potatoes, carrots and shredded chicken. The lager added a beautiful depth of flavor. Plenty of black pepper hit just the right note of heat. 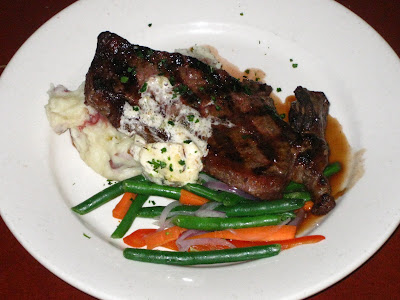 The second course offerings were; Pancetta Wrapped Walleye, New York Strip, and Portobello Linguine. I ordered the New York Strip; a “10 oz grilled New York strip steak served with redskin mashed potatoes, Chef’s vegetables, and Dopplebock demi-glace, topped with malt macadamia nut and herb compound butter.” It was lovely. The steak was cooked just right. It was tender and juicy and could be cut with a fork. The mashed potatoes were … well, I’ve never met a potato I didn’t like so I will tell you I certainly enjoyed them! I loved the compound butter melting all over the steak. Oh yeah. 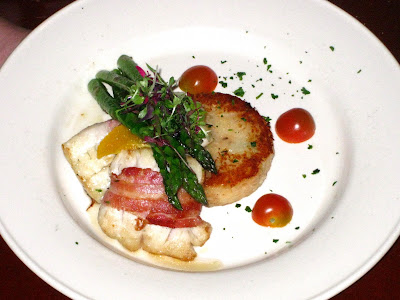 Bob chose the Pancetta Wrapped Walleye; “Pan seared, oven roasted pancetta wrapped walleye, served over potato cake, with grilled asparagus and a ruby red grapefruit micro-green salad.” This was heaven. The pancetta coaxed out the subtle flavor of the walleye that blended perfectly with the potato cake and vegetables. The presentation of this dish knocked my socks off. It was picture perfect.

I wrapped up my dinner with “Beery’s Root Beer Float; Traditional float made with house brewed root beer and Johnson’s Vanilla ice cream. “ I love root beer. And I especially love root beer that is “house brewed”. The Elevator’s root beer is exceptional. It left me wanting more. Do they sell growlers of this stuff? 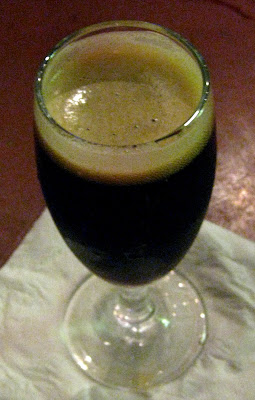 Bob had beer for dessert! He had ordered a dopplebock. But after talking to Dick Stevens and Margie Rachel (Elevator’s owners), he asked our server to bring him the mocha plum stout in addition to the dopplebock. Both of the beers had a dark, mahogany color with a creamy head. The mocha plum stout’s nose was fragrant with coffee and roasted malt. The taste revealed the tartness of plum along with the full mocha and malt flavors. The dopplebock is an old friend with rich, deep, caramel flavors that never disappoint. (All of the above is as described by Bob) I am not a beer drinker but I did taste the stout. It was pretty darn good! Maybe I could like this stuff! 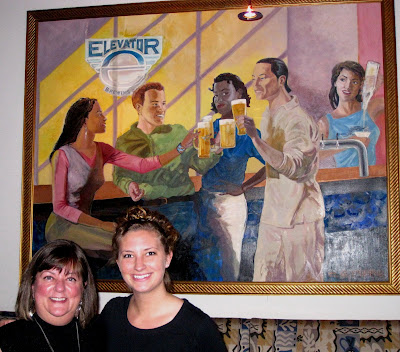 A note about our server; sometimes in a restaurant you are waited on by someone doing their job. On luckier times, you have a server that enjoys interacting with their customers. Saturday night we were fortunate enough to have the latter. Lindsay was an absolute pleasure. What a smile! She was just delightful. (I wanted to take her home with me but Bob wouldn’t let me!) This is a gal who likes her job, likes her customers, and clearly likes the product she is serving. What a gem!

Friends, as soon as you have the opportunity to visit the Elevator, do it! You will so enjoy the food, the beer, the ambiance and the staff. Ask for Lindsay; you’ll be in great hands.